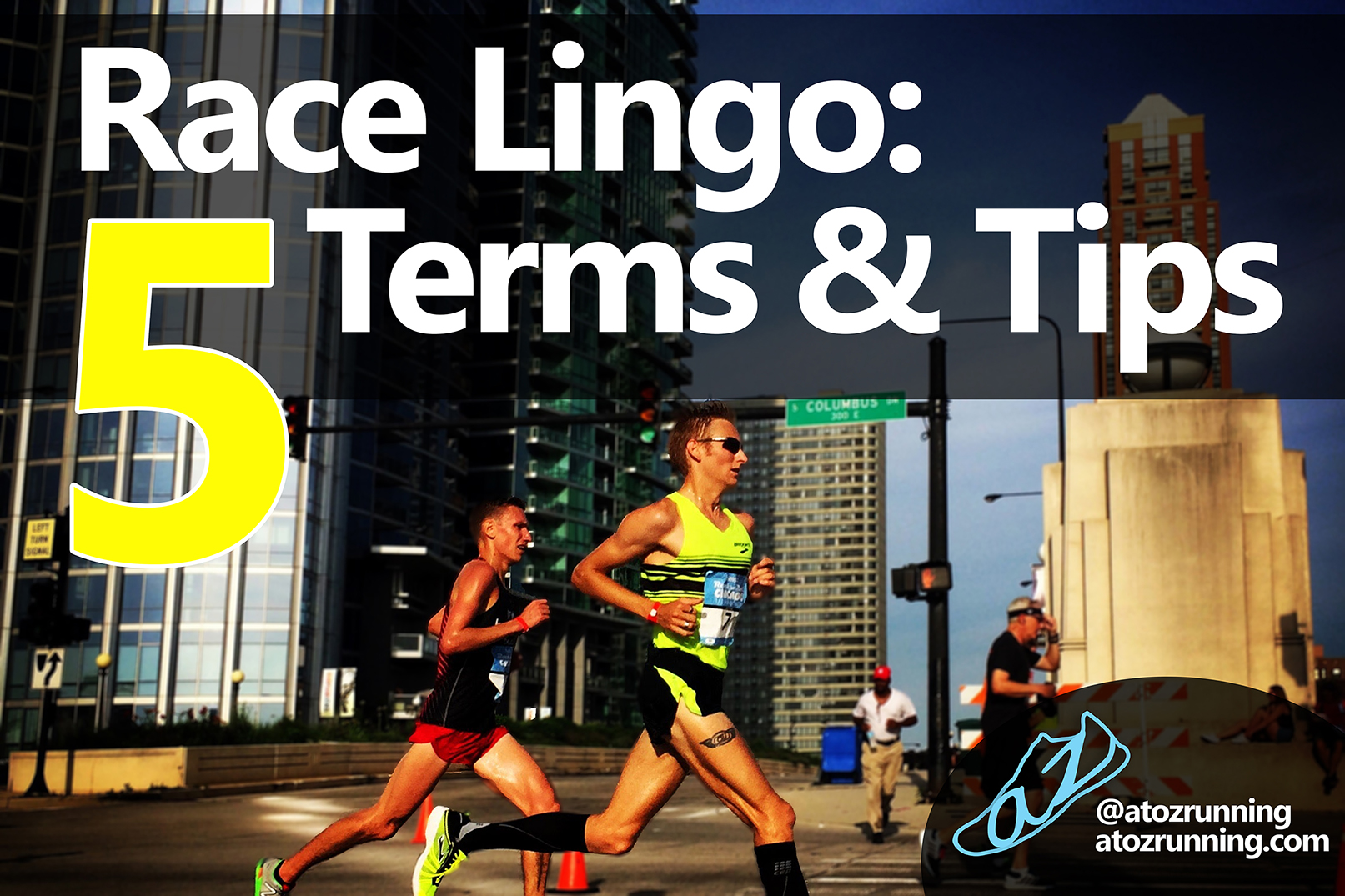 Have you ever been confused by race lingo? Whether just starting out or boasting a wall full of bibs, at some point or another we find ourselves confused by certain terms and concepts. This blog post will dive into a few racing terms and some tips associated with them, but we didn’t stop here.

For THE full AtoZrunning Dictionary, you can find the database here (and it’s a living thing that will continue to grow!): atozrunning.com/dictionary

Better still, if you want the fancy PDF version, just click here, and we’ll send it to you (free!).

Although race results are most often recorded through a chip (which is usually found in the bib, these days), the race registrant’s identification number allows for the race staff to know who the runner is throughout the race.

The bib is often picked up at the expo along with 4 safety pins for attaching the bib to your race top or bottoms. As you know, without that bib, you don’t get no official result (and most likely won’t even be allowed to start!). It’s important. Don’t forget it.

Recently I had a question from a fellow racer inquiring about where to put on a bib. Many races require your bib to be on your front. It’s good practice to always do this anyway, as it allows for announcers to call out names, photographers to distribute photos, and race officials to know who participants are in the race.

TIP: Kyle Culter, race director of LMCU Bridge Run, suggests putting your name on your bib so even strangers can cheer for you. Never underestimate the power of encouragement! We interviewed Kyle about race day suggestions on this podcast episode.

BONUS TIP: Additionally, do not race with someone else’s bib. There are often opportunities to transfer a race entry for a small fee. I won a race one time but did not receive credit at the race event because a male college athlete used his female friend’s bib. He recorded a “win” for the women. By accident.

The term for severely underperforming in a given race (or workout), especially late in effort

It’s mile 20 of 26.2 and you’re toast. Your legs won’t obey your mind to keep up your pace. You fade fast, walking, crawling, or stumbling to the finish line. This is called bonking. It’s no fun.

TIP: Help yourself avoid bonking in distance races by adding a long run into your training plan. We also suggest knowing how to fuel your body for race day and preparing for race day during the weeks leading up to a race.

This video is really hard to watch, but it ends with triumph. Talk about grit!

The race result calculated from the starting line to the finish line (regardless of corral or wave position at the start).

Chip time technology has made race results very accurate. The term “chip” comes from the origins of the timing method when timing devices called chips were tied to shoes. Technology has moved very quickly and now a strip or a sticker within the bib contains the information needed to get a result. The “chip” works with mats at the beginning and the end of the race to give you your time.

When you are perusing results, the chip time is the one you should be looking for to tell you the time you ran for your race distance. Don’t confuse it with “Net Time” which refers to the total time from the moment the race began to your chip crossing the finish line (depending on where you start in the corrals, it may vary widely).

TIP: Sometimes you can find more data about your race by clicking on your name in the results. Your chip may record some splits during your race. Use this data to evaluate your race.

When over the course of a run, pace increases and splits decrease in time

Negative splitting is a common race plan. It is difficult to achieve but gives the mental advantage to the competitor who is passing and accelerating at the end of a race. This term is commonly used in both training and racing.

TIP: Make a plan for your race. We suggest having a strategy (or three) going into your race. You can find a variety to try in our post, Winning Strategies and Racing Mindset.

Check out Sifan Hassan negative splitting with a final 1500m in 3:59 (full mile in 4:17)! This kick was for the gold in the 10k at the 2019 World Championships in Doha and might be one of the most impressive races we’ve ever seen:

Starting corrals help the flow of a large race to get everyone through the starting line in sections according to expected finish times, fastest going first. Because of chip timing, your chip time will start when you cross the mat at the beginning of the race. For most, the exact position in the starting corral makes little difference.

TIP: Know where your section of the starting corral is. I cannot stress this enough. At races like Bank of America Chicago Marathon, the corrals span several blocks and aren’t even all on the same street. Know where you are starting the race before you show up. This sounds obvious, but it can be tricky at times.

Take a look at the start of the 2019 Tokyo Marathon (audio is bad, but the video gives a clear example of why it would be important to know where you start):

Your friend is about to go for broke, and you’re there to encourage and support. And just happen to be wearing running clothes (it’s a race, after all). And just happen to be standing right next to the road just out of sight of the start line (hey, it’s better to be right up close so your shouts will be heard). You and I both know what you’re thinking in the back of your mind.

I’ve been there too. He was going for a BQ and wasn’t sure if he had it in him. Plus, who was going to carry his Redbull for mile 18 and take his iPod when it started to get too sweaty? (Yeah, this memory goes so far back that iPods were and Spotify wasn’t.)

TIP: While banditing races is probably harmless in most scenarios, it sometimes results in future disqualifications or permanent bans from an event and can belittle the cost and sacrifice others absorbed to participate. While I thought it justified at times in the past, I find myself entirely willing to pay an entry fee, now, if only to support a friend. In some ways, the gesture even amplifies the support given.

There are many more racing terms to explore, and you can find them ALL in the AtoZrunning Dictionary. If you’re reading this and want help getting started, feel free to reach out! We are happy to answer your questions. For all of you veteran runners out there, if you think members of your group, entrants to your race, or your newer running buds might appreciate learning the race lingo, please share! This post may be a helpful read before their next race.