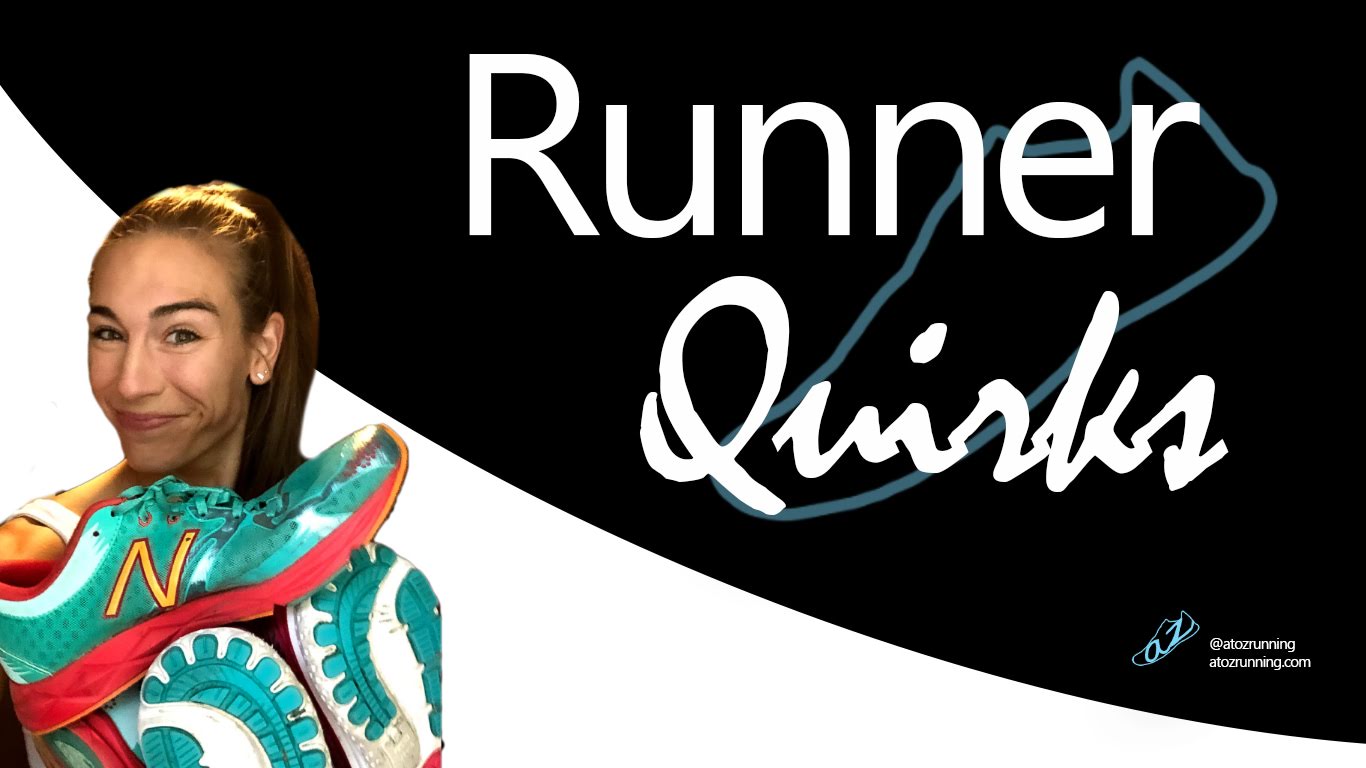 It’s that thing runners do to thumb their noses at sensibility everywhere, to denounce conformity and renounce level-headedness.

In college, I once made the mistake of asking a competitor why he always wore oversized white tube socks in every race (most of them boasting the kind of wear and tear generally reserved for victims of bear attacks). His answer captured in its purest form the essence of this article. With a blank expression and plain matter-of-factitude, he said,

“Because that’s what I do.”

The oddities that define us

Over time, I have come to appreciate the idiosyncrasies that, whatever else unites us, truly and distinctly define our individuality. While some of those, like Jed’s tube socks (and I cannot help but add Alex’s Waldo-candy-cane socks!), are especially apparent, most are generally unnoticeable.

But they exist, and we thought it might be a bit of fun to tap into our runner quirks.

I’ve distilled the broad topic into three categories, everyday, training, and racing quirks. Also, we will be revealing some of our own strangeness as well as some that others have shared with us, but if you didn’t have a chance to let us know before the words hit the press, drop a comment below and share some of your runner quirks!

Andi and I eat the same breakfast (almost) every day. Bagels with peanut butter and coffee. It’s not some compulsive need without which we rapidly erode into rabidity. We just do and have for years.

Speaking for myself, the strangest aspect of that fact is how much I get excited in the morning for my bagel and coffee. It’s borderline absurd.

If I were to bet, though, I’d put money on the odds that you are probably relating to that comment more than ridiculing it! You don’t need to be a runner to own and love your little things.

We tend to see runner quirks most in these areas:

How many of you like to do certain things during your day in very specific ways? I like to keep my shoes in individual boxes, especially my running shoes, so that I can stack them easily and rotate the stack every time I wear a pair. Makes it really easy to keep track of which shoe I plan to wear on a given day! Just grab the box on top.

Food is a guarantee. I already mentioned our breakfast thing. That one actually has a bit more intent behind it, though, because the carbs plus fatty protein is a decent pre-run meal.

When it comes to clothing, though, it seems just as often that people either care far too much or not at all about certain aspects of their outfit. Mismatched socks trend? That’s like saying it’s cool to read books upside down. Please.

… Well, I guess I did go through an annoying phase in my twenties when I thought it was cool to race in tall compression socks that were opposite color patterns. (Good thing Andi couldn’t find a picture of THAT one!)

But who wasn’t at least a little foolish in their twenties?

Day-to-day aside, the stuff we do in training can be just as strange but often can have more rationale. Take, for instance, Andi’s habit of planning runs along routes that are either heavily wooded or contain public restrooms or porta-johns. Anyone have a guess why?

I had a teammate in college who often ran with an extra glove on one hand in the winter. Eventually the story surfaced that he once left for a winter run (think: no leaves on trees) only to return less one glove. Thankfully, he would often say with a wink, he had forgotten his nice gloves that day.

Erin Laplander, an athlete trained by AtoZrunning and past college teammate (not, I should add, the one mentioned above), shared with us that she, when running with someone else, has to run on the same side the whole time. No switching! Of course, my question for you, Erin, is that if you were to run an out-and-back on, say, a bike path, does the “same side” mean that you have to always be on the other person’s left, for example, or that you have to always be on the West side of the trail?

I, however, generally prefer to run as close to the middle of the road as possible. It’s flatter and almost guarantees that cars will see you AND be forced to slow down. I move over, of course, once they get near, but I have never experienced near-death while running in the middle of the road. Can’t say the same for when I run on the side or even in the shoulder.

Still, I must NOT advise anyone reading this to run in the middle of the road. Please don’t do that. And especially not on my account.

There is far too much to say on this topic, but I’ll start with one that helped motivate this post. Marathoners especially listen up. Race nutrition and fuel is imperative. While I advocate strongly for a training program designed to lessen your dependency on sugar and caffeine during your race, you can still do yourself big favors by implementing an effective fueling plan on race day.

And testing it ahead of time.

Have you ever grabbed a random gel in a race, ripped off the tag, and slammed that hot tamale like a baby chugs his bottle? That was how I learned that God made the cocoa bean to be enjoyed in the pleasant quiet of an evening treat or some such setting. Not crammed into a 1-ounce packet of pure regret.

That experience led me to forming my rules on gels and racing. They are really quite simple, too.

The great tragedy about my gel preference is that my top choice, the Powerbar Power Gel Hydro C2max, no longer offers a caffeinated orange. Instead, I am forced to choke down a MOJITO-flavored gel. Who comes up with this stuff?

And before you think to yourself, “Ooo! I like mojitos. I should try that!”, just remember that I, similarly, like chocolate. See where that got me.

How about Andi, then?

What are her runner quirks? I’ll give you two of hers that have followed her since the dawn of her running.

First, she has to touch everything in her bag before a race. Some of you saw that flat pic thing we had of our racing stuff before the Quad Cities Half (if not, that link will take you there!). You thought we were trying to be cool, but actually, we do that for a reason. Andi, specifically, because she can’t sleep until she pulls everything out of her bag. I’ve been around her when she hasn’t, too. Be glad you haven’t witnessed that.

Additionally, and one of my personal favorites, is that she swears by the race smile. Oh, yes. It’s a real thing. Andi forces herself to smile while she races. It’s possible some research has indicated that it can help, something about relaxation and optimism. I just think it’s valuable to have first-hand knowledge about what the Cheshire Cat would look like as a distance runner!

A few more from all of YOU

One more from Erin Laplander. She can’t abide the tan line fade, so to combat it, she always runs in garments of the same positioning (think sock height, straps on shoulders, etc.) to create a single, consistent line. She does have to tolerate plenty of odd stares every time she wears flip-flops, but what runner doesn’t?

George Goad can’t run without crunching numbers. Especially when racing, he is constantly formulating splits and calculating effort. It sounds to me like there’s a good chance the idea of running without a watch might endanger his health!

David DeVries has to wear something orange when he races. Let’s assume that means he’s not colorblind. He also won’t touch sugar or caffeine, which explains why he is often spotted hammering a wooded trail with Mazi’s leash in one hand and a jar of jumbo dills in the other! (Kidding. It’s actually health reasons and is quite wise in terms of effective fueling, as well!)

Sarah Bartz crinkles up her bib before a race, “DO NOT BEND” warnings aside. It remains a mystery why she’s never been given a chip time in a race, but that’s probably just a tech problem.

I’ve clearly embellished some descriptions, but that’s also part of the fun! What better way to enjoy the running community than laughing at each other for our runner quirks? We laugh because we understand both the absurdity and necessity of these oddities that give us flavor.

Is there a point to all this?

What you didn’t see coming is that there’s more of a message here. We all have our runner quirks, but many of us don’t spend much time evaluating the impact of those things. Whether because they arose out of some obscure habit or formed with meaning and intent, the very existence of such a powerful force in our routine should always be attended with careful scrutiny.

And they are definitely powerful because most of us do not question them. They are the small things we do without fail, whatever the cost. I’m not proud of the amount of money I spent on my gels for the Chicago Marathon, but I did it anyway. That’s only a small example.

That is the point we must scrutinize. Every quirk has a price tag, in some sense or another, and we need to first identify and acknowledge that and second, consider whether such a cost is truly worthwhile.

I’m not sure I can tell you how to decide that last part, but I can say that for us, when the idiosyncrasies ask a price of our relationships or well-being, we know it’s time to make a change. And we all know the challenge of attempting to change a well-entrenched habit, so the sooner we see that and take a different path, the better.

As always, and especially considering the nature of the topic, let us know what YOU think about runner quirks by leaving a comment below (or sending us a note)! And by the way, have you heard? We will be launching the AtoZrunning Podcast NEXT WEEK! (If you haven’t heard, chances are it’s because you’re not a subscriber. Just click to join – it’s free and will keep you in the know to a greater degree with nothing more than an email a week.)

Tips for Racing in the Rain