In this week’s episode of the A to Z Running Podcast, we discuss how  runners can seize opportunity. Kate Grace turned disappointment into diamonds (Diamond League). Tune in for Kate Grace’s journey!

WHAT: Antrim Coast Half Marathon

How can we turn disappointment around? A limiting factor to success in running can be a major disappointment. It can shake us, make us question ourselves and our goals, even fall into depression at times. If you’ve struggled with this, you’re not alone. We’ve been there.

When considering this topic, it didn’t take long to realize the perfect inspiration for this topic is the journey of Kate Grace.

Through her story and even a few remarks from Kate, we can learn how one can turn disappointment into diamonds.

For those of you who are just joining the A to Z Running Podcast, or for those of you who need a reminder, we’ve been tracking Kate Grace’s 2021 on the show. It’s been a year of a lot of change, some disappointment, and some major personal bests.

About our Guest: Kate Grace 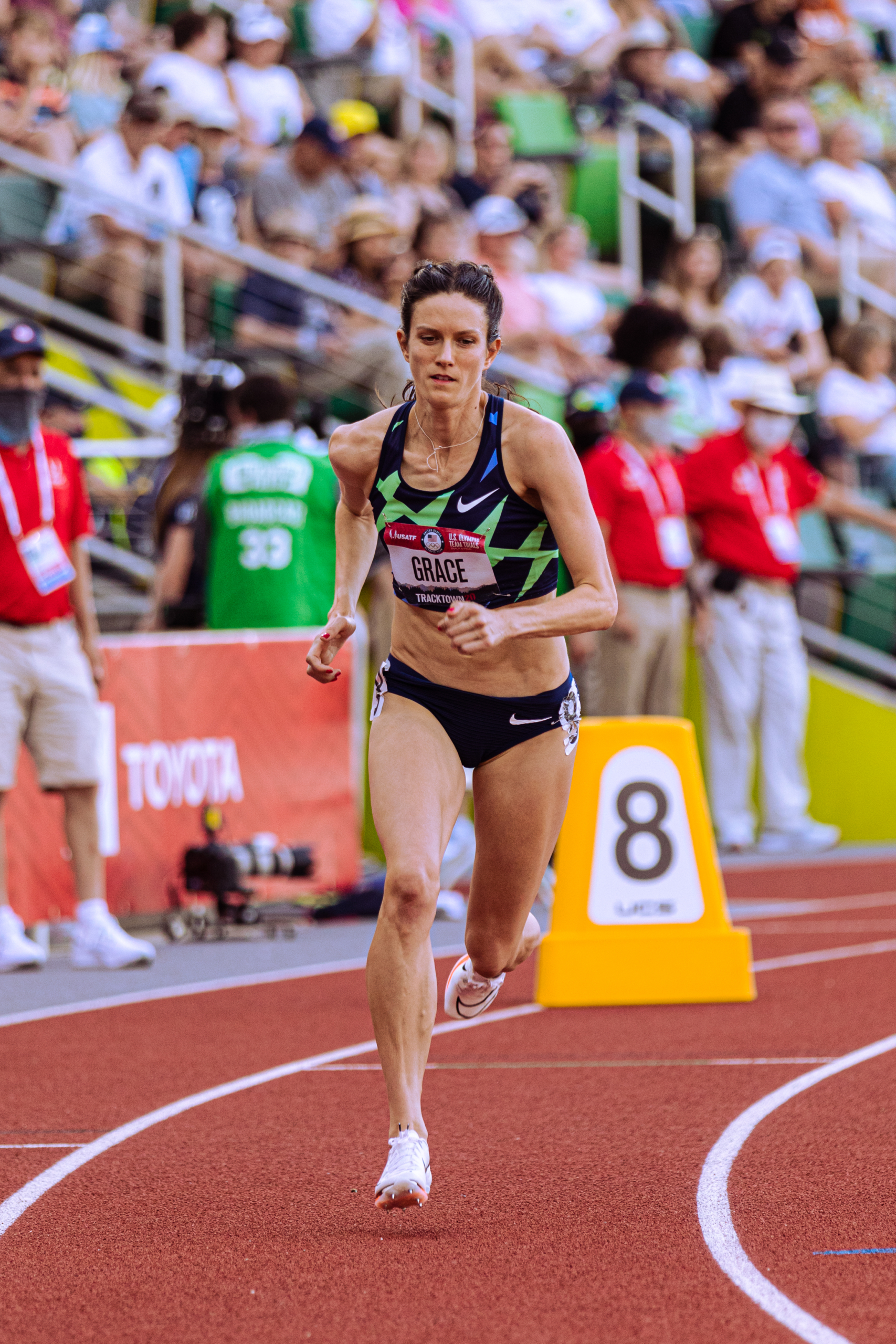 Although Kate Grace was a decorated collegiate runner and 4x record holder at Yale, stepping into the world of pro running wasn’t a clear path. While she did earn a sponsor before the 2012 Olympic Trials, Oiselle, she was the very first sponsored athlete from the company. She took her opportunities with her east coast training group and brand new sponsor to her first Olympic Trials where she was 20th in a time of 4:12.92.

Could she have been disappointed? Sure. Did she continue to keep pursuing? YES.

It was a big year for her. Things were going well.

As in all running stories, sometimes highs are followed with lows and in 2014 and 2015 she changed coaches a couple times and battled foot injuries.

While there were few years of changes, in 2016 under Coach Drew Wartenburg, Kate qualified for the Olympic Trials in the Olympic standard time, running 4:06 for the 1500m. It was a good year with a 2nd place finish at the New York Armory Women’s Elite Mile and 5th at the Fifth Avenue Mile and improved her personal best 800m to 1:58. Progress. Hard earned after injury and change.

“I made my first Olympic team when I was 27. Almost immediately I started to hear that I had been at my peak, implying I was on the decline. It’s one of the reasons I promptly switched to the 1500 after finishing eighth at the Olympics in the 800. It’s the prevailing understanding that the longer the distance, the older an athlete can excel. Also, I’m good at the 1500 and I wanted to give it a shot. But it’s interesting to note just how fully I switched gears, and wonder how much of that came from the idea that I had outgrown the 800.

When the Olympics were postponed, I cried. I was devastated that day partly bc of the belief that my time was slipping away. I’ve been thinking about that belief as we finish preparations for the Olympic trials, about what I thought this year would be vs. what it is becoming. I told myself I would make the most of the extra time—use it to heal and injury, get stronger. But I knew the perception that I was fighting an inevitable fade, and it made me more timid to talk about my goals.

The difference between exception and reality for this year has been the best surprise. I sometimes wonder what I would say if I woke up with amnesia, and had to go for a run and guess my age. I don’t think I’d say 32. But I’m learning to ask…why? I feel strong and fast. And if there’s one thing I know as an athlete, it’s to trust my body, stop the mental calculations, and get TF out of my own way.

So ya… I’m just out here doing it. And in the wise words of Alexis Rose, I’m loving this journey for me 😜.”

In 2017 Kate signed a contract with Nike and continued to race and progress her running career. At that time she joined the Bowerman Track Club with Jerry Schumacher as her coach.

In the summer of 2020, Kate was battling injury. A year with little opportunity for racing anyway, Kate focused on becoming a student of her own training with a strong focus on rebuilding. (Tune in for Speed, Strength, or Endurance with Kate Grace on the Podcast). During the winter of 2020, Kate left the Bowerman Track Club to join Team Boss. Kate discusses how this was a leap of faith for her.

“No one says it’s a good idea to change training and coaches 6 months before the Olympic Trials. I would not advise someone else to do that. But hey, they say the exceptions prove the rule.

Of course I had a plan for how I wanted this year to go. But the way Team Boss, Emma and Joe have welcomed me into the fold is just beyond anything I could have hoped for.

There have been a few workouts recently where I’ve finished and immediately said thank you — to the person pacing, or cheering, holding the watch. It’s kind of a weird first reaction while gulping air. But that’s just where I am right now… overflowing with gratitude, and ready to go to battle.”

In March, Kate wrote on IG, “There is no better feeling than choosing your path, and then hitting full send toward your goals. I think I’m addicted.”

Kate took an opportunity, she took a risk, she weighed the options writing, “I knew at the time that going back to 800 training was a risk, as was starting with a new coach and team so late in the game. But I also knew that the greater risk was letting the opportunity pass untested.”

At the Olympic Trial in June, displayed a strong showing, but the US 800m women are the most impressive in history. All Kate Grace’s rounds were indicating her upward trajectory. Her time at the trials of 1:59.17 was just shy of her 2016 Olympic Trials winning time of 1:59.10.

While she was clearly ready to make an Olympic team, Kate did not wait to have processed her disappointment before making the decision with Coach Boss and her agent to compete at the Diamond League.

Today on the A to Z Running Podcast we are excited to have Kate Grace on the show to tell us how she has turned her disappointment around quickly to run the best races of her life at the Diamond League this summer.

So after all this talk of turning things around and seizing opportunities, if you want the same in your own running right now and aren’t sure what to do about it, check us out at atozrunning.com/coaching. 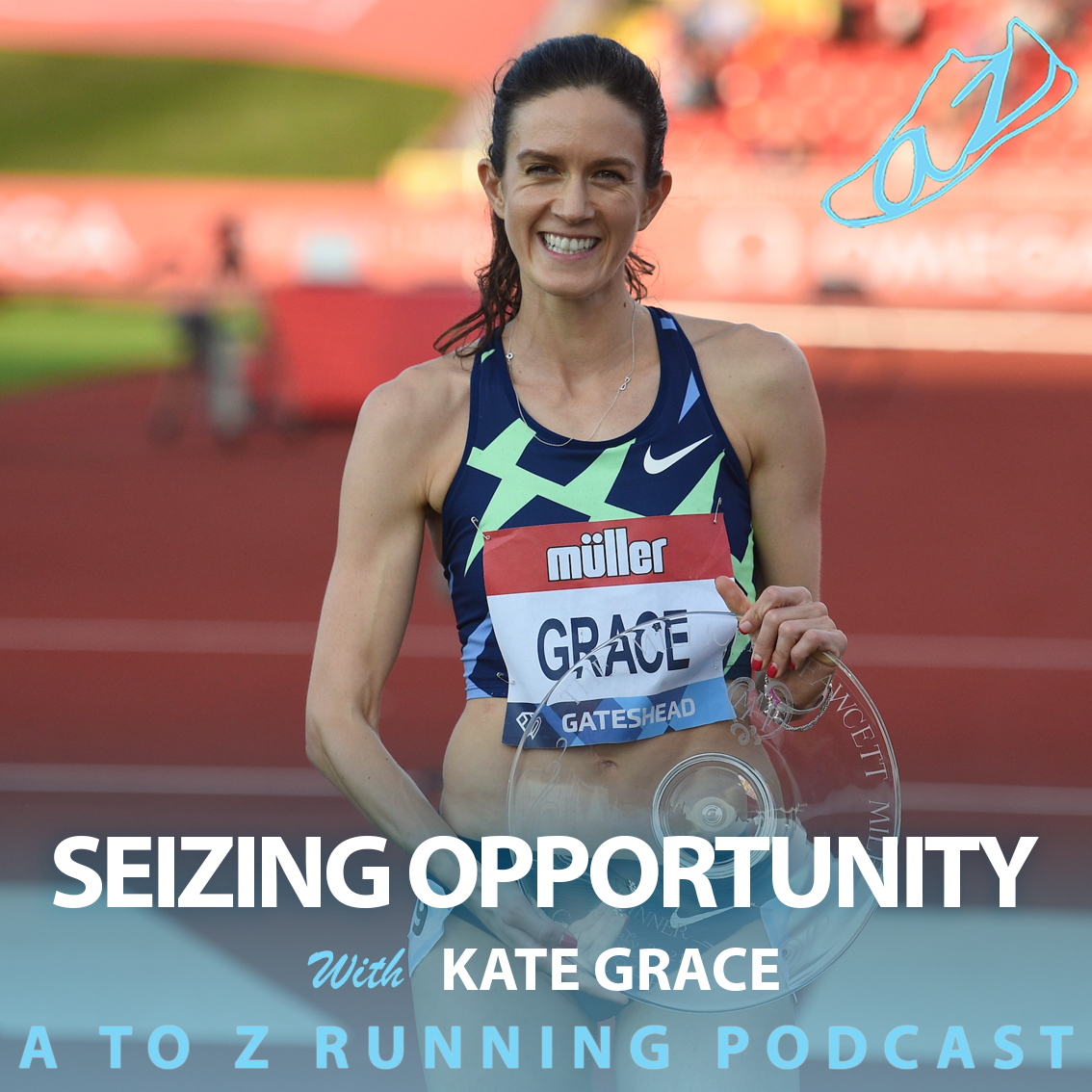