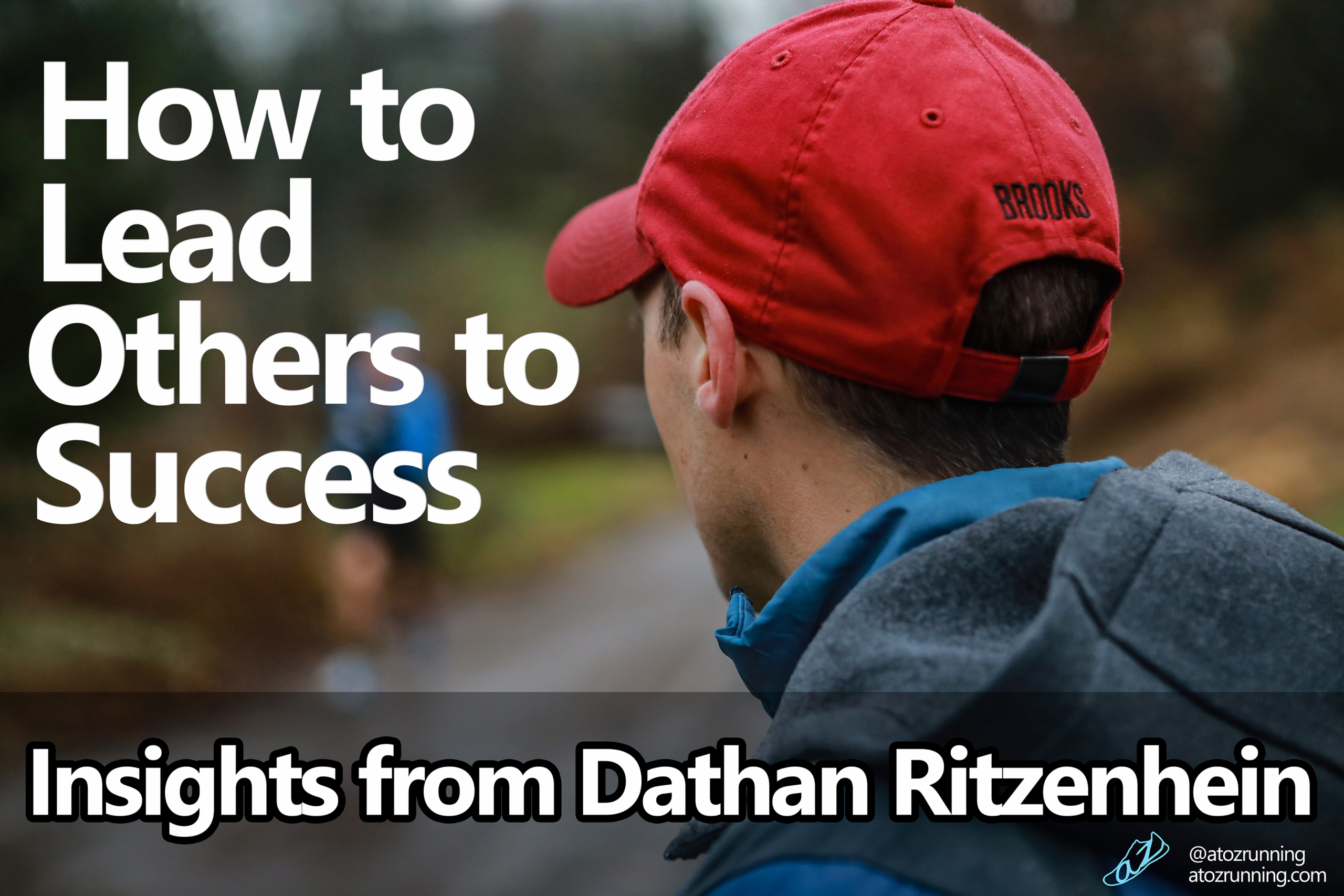 Imagine a coach. Stopwatch beeping, voice bellowing, cargo shorts fraying. Am I right? Whatever the cliches, most of us stand a little taller today because of some coach in our past. Coaches represent the driving force behind so much growth and success across so many walks of life that we decided to devote this article to that very idea, leading others to success.

To dive as deeply as possible, we spent some time with Dathan Ritzenhein (you recall our recent podcast interview) and some of the elite athletes he coaches and learned a lot about his approach to growing other athletes. The best part about it is that everything Dathan believes about coaching athletes can apply to any one of us in so many ways! Take a look at our synthesis of those ideas below, then keep reading to find the complete interview.

It may be tempting to think that being coached by a three-time Olympian with over 20 years of elite training experience would be a simple scenario. He gives you a training plan, you do the training plan, and you run awesome. That’s not how Dathan sees it. And that’s not how his athletes see it.

In Dathan’s words, “Writing training is fine, but it’s mostly about building trust with an athlete… It really is a partnership.”

The unfortunate fact is that it can be easy to reduce such a relationship to an interaction between a coach and an athlete, but those identities are secondary to the simple humanity of a relationship. We are (both the coach and athlete) people deserving of dignity. It takes no more than casual observation of Dathan and his athletes to see that fact present, and it’s a wonderful thing!

Dathan is an awesome coach who cares deeply about his athletes both in running and personal well being. He’s a great communicator with rich knowledge about the sport. Working with him has given me an appreciation for the level of excellence that he achieved and has spurred me to reach for the same heights.

I have seen the most growth probably in my confidence and ability to take on hard workouts and races. [Dathan] believes in me and makes sure I know that. Sometimes I’m pretty sure he believes in my ability more than I do. So between him pushing me to do things I would have laughed at a couple years ago and his steady support, I’ve been able to see myself as more of an elite runner than ever before.

When an open and trusting relationship is the priority, what follows is not surprising. Just like fostering relationships, training athletes includes significant nuance. Once more, Dathan said it well, “Everyone is different and being able to make the best plan for anyone starts with getting to know them better.”

The personal touch cannot be over-emphasized, but it’s not just about differences from other athletes. It’s equally important to recognize that one athlete’s needs are likely to change over time, as well.

For Dathan and his athletes, it goes well beyond the simple training plan, too. Read the whole interview (below) for a fuller explanation, but weathering injury, setting goals, and addressing potential conflicts are all a part of the personalized approach Dathan brings to support his athletes best.

Dathan is super flexible with making training around my work shifts, super knowledgeable about injury prevention and is great with meeting with the team during workouts and organizing workouts around all of our schedules each week.

Being coached by Dathan has given me a tougher level of mental confidence. I know he focuses heavily on not over-working, so when he says I should be able to do something, I know I can do it. He’s helped me separate my emotions from running; removing running from my entire identity has given me more self-confidence outside of the sport, too.

Of course, success requires more than sound relationships and personalized training. One element that can never be ignored is firsthand experience. We can all agree Dathan has plenty of successful running experience (national high school and college titles, US records, Olympic Teams, and quite a bit more), but perhaps one of his greatest assets as a coach is how much adversity he has faced.

“For most athletes,” Dathan noted, “injuries are their worst enemy. I have had so many over my own career, and I am very proud to have always come back from them.” Further still, he underscored how “I have broken most of the bones in my lower body with stress fractures and have had multiple surgeries. I take those experiences and help guide [my athletes] so they can come back stronger and healthier.”

This adversity becomes even more imperative when addressing the immeasurable influence of an athlete’s mental and emotional state. As Dathan indicated, empathy matters. “Nobody is perfect, and as a coach I like my athletes to know I’ve probably gone through what they have.”

25k American Record holder and 2:10 marathoner Parker Stinson can speak to that:

Dathan’s professional running career experience has been a critical part of him helping us have a great year. A coach’s job is first and foremost to get you fit and prepared. But with Dathan, you are getting a coach who is also brilliant at helping you navigate the injury issues that will inevitably be coming your way when you’re pushing the envelope. He knows how to put an athlete in a big time situation healthy and hungry!

[Dathan’s] experiences as a professional runner equip him to help all of his athletes navigate the highs and lows of training and racing. He truly loves us and cares about us as people first. When he gives advice you can always trust he knows what he’s talking about because odds are high he went through a similar experience himself.

Running-wise, [Dathan has] been to the mountaintop and back numerous times and had to fight through seemingly every injury and illness to do it. So as a coach, he’s very empathetic and knowledgeable about every running related topic I’ve personally encountered so far, and I think my teammates would agree.

Dathan has a lot more to say about coaching athletes than what we highlighted above, so for those who want to read the full interview, you can find that below!

Dathan: Coaching athletes has been great for me because I spent so many years focusing on my own career. It is a selfish sport when you are a professional athlete. You spend most days focusing on yourself, and everything revolves around training and racing. I like being able to give some of that energy I have and experience I have gained, giving someone else the confidence to get the most out of themselves. It is a great feeling when you see your athlete achieve their goal or overcome an obstacle.

AtoZrunning: What are the hardest challenges that you help athletes overcome?

Dathan: For most athletes, injuries are their worst enemy. I have had so many over my own career, and I am very proud to have always come back from them. But many athletes don’t know what to do when they are stopped in their tracks with an injury. I Like to think I have a unique experience that can help them overcome many of the running-related injuries and setbacks that happen. I have broken most of the bones in my lower body with stress fractures and have had multiple surgeries. I take those experiences and help guide them so they can come back stronger and healthier. I have a very good network of health care providers who are enthusiastic and knowledgeable to get them back on the right track. Most of the time they just need help with a road map to get back.

AtoZrunning: What comes the most easily and naturally for you?

Dathan: I think I am generally just good with people and helping to identify what they need. Writing training is fine, but it’s mostly about building trust with an athlete and having them gain confidence from the training. If they have those things, the training will work because you start to understand them as a person. Everyone is different and being able to make the best plan for anyone starts with getting to know them better.

AtoZrunning: What are some potential pitfalls that you feel other coaches should seek to avoid?

Dathan: I’m still learning myself, so I don’t like to judge like I know best. But I do think understanding that there is not a one size fits all approach. Being flexible to each athlete is important. It’s harder in some circumstances than others. If you coach a big team, it is just harder and more time consuming. I have had to just back off when I get too much to handle. If I’m doing a bad job then I know I’m at my max.

AtoZrunning: What negative tendencies would you suggest athletes try to avoid when working with a coach?

Dathan: Avoid letting things bottle up. Often times, athletes hold back questions or hesitate because they don’t want to upset the coach. But it usually just builds, and trust in the system starts to fade. Talk to the coach. It’s ok to be open and have questions, but if you don’t trust them it won’t work.

AtoZrunning: What are, in your experience, the essential keys to a successful coach-athlete relationship?

Dathan: Trust and openness. It really is a partnership. You have to be able to ask the questions and feel like the other person is listening to your concerns. Both as an athlete and a coach. Being able to take criticism and praise are equally important.

AtoZrunning: What other structures or routines (if any) do you feel could further strengthen the effectiveness of the coach-athlete relationship?

Dathan: Regularly sitting down for checkpoints is important. Setting goals each season and revisiting how things are going is important. An entire year or season are long periods of time. It takes more time but it is something that helps each person refocus on what the end goal is and why you are doing all that training.

AtoZrunning: How would you recommend an athlete or coach navigate a situation when the relationship simply isn’t working out?

Dathan: Openness is always important. So much time and energy get poured into the process and I think one party sometimes feels blindsided if confronted about what isn’t working. Having the ability to be approachable helps. If an athlete can approach their coach without reservation of judgement, they will be able to bring most problems to the forefront. It isn’t always easy because I think many athletes hold onto demons and don’t want people to know about them. That’s natural for anyone but particularly to athletes who think they need to be an island. Nobody is perfect, and as a coach, I like my athletes to know I’ve probably gone through what they have.

One Small Change | Podcast ep 10
Scroll to top
Interested in a Service?