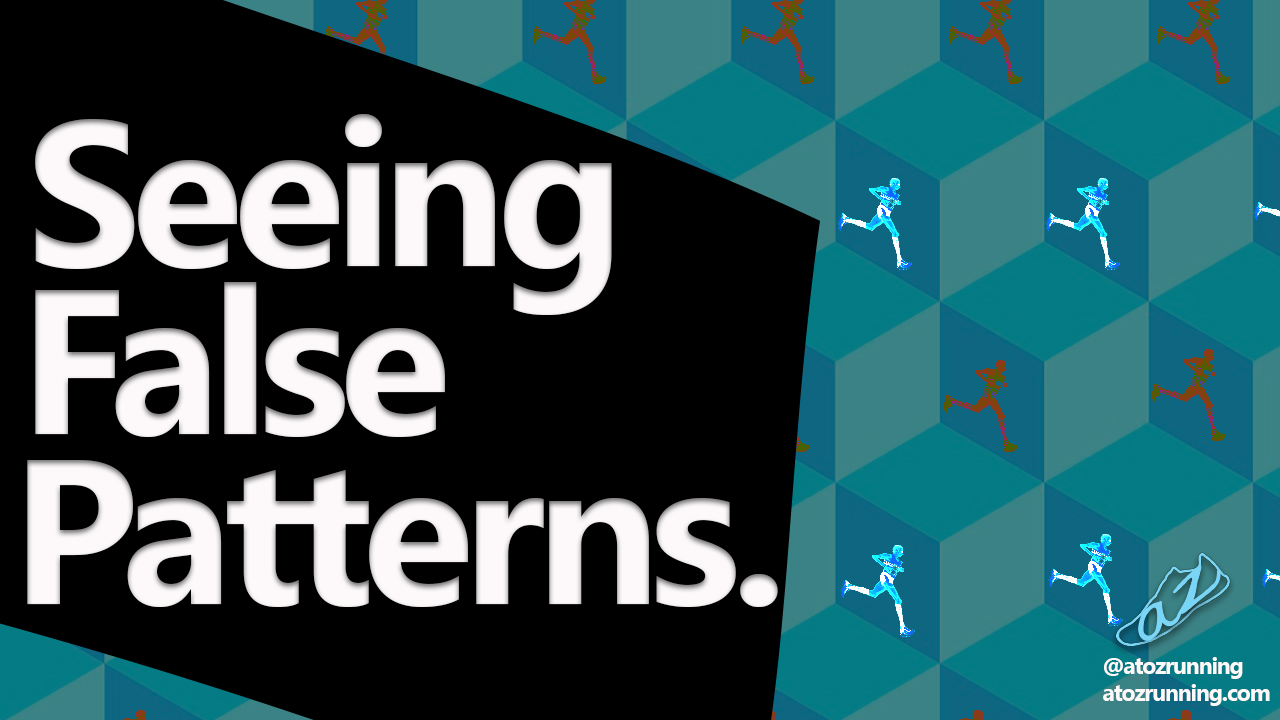 As runners, we assign the majority of our attention to the topic of how the body works (and specifically, how to make it work better!). Incidentally, most of us do not consider ourselves experts in topics like how the mind works. Myself included, despite my ongoing fascination with psychology and neuroscience.

That’s why I read people like Pete Hollins. Take a visit to his site there, enter your email (you’ll get added to his mail list, but it’s not overwhelming), and he will send you the cheat sheet of seven studies.

Number four on that cheat sheet immediately caught my attention. It’s called “The Clustering Illusion” and suggests that “we attempt to see clusters, patterns, and predictability in situations where there is inherently none.”

In my experience, runners are not immune to the clustering illusion.

The False Patterns We See

What are some of the false patterns we tend to see?

It usually goes like this: I eat spinach balls and gnocchi with balsamic glaze for dinner one night. The next morning, I run my normal 18 miles but feel like I’m burning NOS and bouncing in next year’s Kipchoge boots. What caused such a dandy dash? Clearly the quasi-Italian delicacy the night before, yes?

How about that uncanny fixation on two gulps of tangerine Gu halfway between 14.6 and 14.8 miles of the marathon? Well, of course it works because that one time on that one day when I did that one thing.

Those are the harmless examples.

Just like the gambler’s mantra that Hollins mentioned, “It’s been red for so long, it must be black soon!”, we like to think that results are a matter of some kind of earned right because I put in the work. Or I did all these great workouts, so my race HAS to be a PR.

But is that pattern true? Depending on the data, it might be, but only if we are looking at the right data in the right way and making the right decisions accordingly.

The Most Important Data

For a runner, there are really only a few things we need to know in order to judge whether we are moving toward our goal. I boil them down to: am I able to run faster, longer, or faster for longer? If one of those three is true, that’s good. If all three are true, then I’m moving up. The question is what data captures those facts most effectively and objectively.

Essentially, I want to be able to identify the patterns from the objective data at hand. As you can see, I am making a clear and direct argument for the importance of external objective input and feedback (not surprising to those of you who listened to this episode of our podcast).

In my mind, there are certainly several different effective perspectives on this kind of thing. For instance, I think it reasonable that some may desire a high frequency of feedback (realtime, daily, etc.). I tend to fall into that camp out of personal preference.

I also know of many successful athletes who prefer to receive only occasional external feedback (seriously – there are runners out there who do not wear a watch, do not time their runs, and do not measure their distance… does that sound liberating or absurd to you? I’m still not sure myself…).

Whatever the case, I would argue that anyone chasing some goal or another should probably seek feedback in some capacity before that key goal race. For most of us, early and often tends to be best.

So what’s the most important data?

Time and effort (like heart rate or power output). The raw truth is that most of us fixate on distance and pace, when in reality, those are the most likely sources for our clustering illusions. There are simply too many unmeasured variables that influence distance and pace. If you want to dig deeper into that, go back to that podcast episode I mentioned and give it a listen.

Honestly, I would be giddy if I could run once/week connected to a billion machines to measure all of that. There’s a story about how Galen Rupp used to occasionally run on the Nike track after they covered it with sand so that they could more naturally measure things like stride variation, weight distribution, etc. Given Alberto Salazar, that’s not surprising.

But the point remains. If you want to find a pattern, do so based on clear objective data that is truly indicative of that pattern. Just because I ran five bad races or workouts in a row doesn’t mean I’m due for a good one.

The Most Important Decisions

That leads us to the actual decisions we make. And truly, when it comes to these kinds of things, most of us (we are as guilty as anyone), make most of our training decisions somewhat flippantly. We rarely realize the possible detriment of such flippant decisions.

Let me give a quick example.

Assume your training plan incorporates a steady state run every Wednesday for 60 minutes. Doing that run a couple times, you find it very difficult to keep up a high level of effort for that long, so instead of 60 minutes, you run 40 minutes.

This is a common example of making the wrong decision, likely because of a simple misunderstanding. Why is it the wrong decision? Because the most important dynamic of a steady state run is the volume. Pace is secondary.

Of course, returning to our topic of patterns, if you consistently find it impossible to traverse the 60 minutes at a reasonably hard (steady) effort, there most definitely is a pattern somewhere that necessitates a higher degree of scrutiny. Simply adjusting the workout to be more manageable should never be a long-term solution (unless, of course, the training plan was NOT tailored personally to your abilities, goals, and needs).

That’s why I am a constant advocate for outside opinions and careful reflection and scrutiny. Personally, before and after every training cycle, I reread and review many of the more significant influences on my training philosophies. It’s also why I have a number of different persons with whom I discuss such things, persons who have different perspectives, experiences, and understandings than I do about our sport.

What about you? Where do you go to get objective, informed, and personal feedback or input when you need it? Most of us don’t have as broad a background in things like kinesiology, physiology, biology, and chemistry (let’s toss in psychology while we’re here!) as we might need to accurately assess a given concern or potential pattern in our training.

(Heads up! I’m putting together a pretty solid book list that will be available in our Gear Bag soon and might help with these things!)

It all amounts quite simply to this: how can we make the best possible decision with the best possible data? There’s not one distinct answer to that question, and that’s infuriating. But we can make incremental gains by pursuing a deeper understanding of our sport and seeking input from trusted sources.