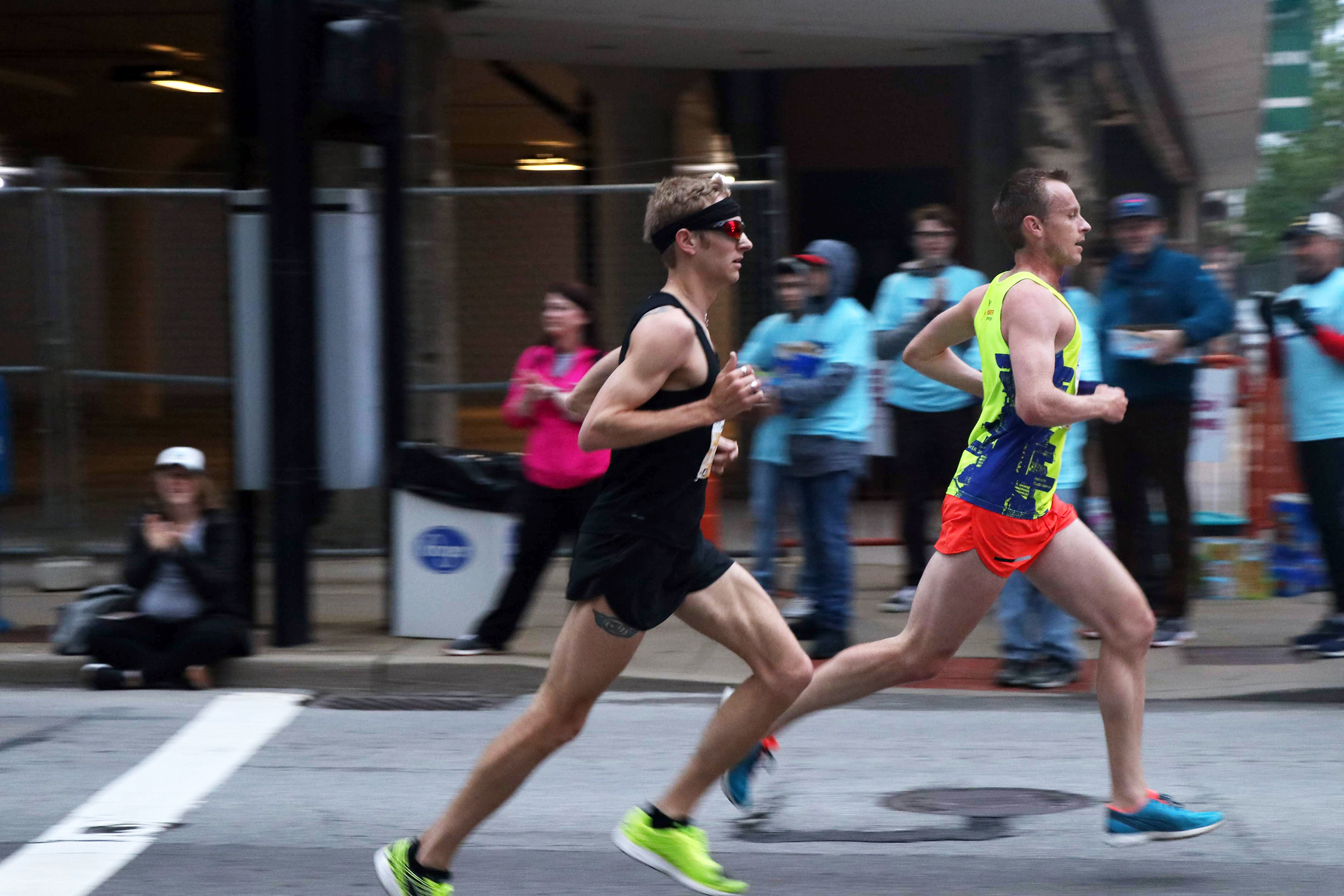 The cool, pre-dawn fog drifted lazily off the Ohio River as we confidently bore down on the starting area.

Actually, there was no fog. And no one was bearing down on anything. But I did enjoy the low-50s, cloudy weather. I did not enjoy the 6:30am start time.

Really though, the early start time was about the only negative of the experience, assuming you ignore that I did basically zero warm up, nearly missed the start, scrapped my race plan within the first mile, and upon approaching the finish, spent nearly 200 meters trying to decide what to do with my arms while “breaking the tape” only to freeze in my uncertainty and do nothing at all except run straight through like I forgot it was the end of the race.

I didn’t, in case you are wondering – forget, that is. I am quite sure of it.

Whatever my follies, though, I have conjured two simple observations from my experience in the Flying Pig Half Marathon.

Hanging with the Locals

Let me back up and preface this in two ways. First, you probably need to hang with the right locals to see any kind of benefit. Second, I would never do this on purpose because I make sure to do whatever I can to avoid people when I go to events.

Except in this case. Because my sister and her family were the locals.

They are the reason we were there from the beginning. In fact, the single reason for our presence at that event, more precisely, was my brother-in-law’s crazy idea to cross off a bucket item and run a marathon.

Kevin, apparently. And he does it quite well, as it were, dropping a respectable 3:17 for his first (and to hear him say it, only) marathon.

But to my point: as a local, he knew where to go, when to get there, and what to avoid. That’s priceless peace of mind for anyone who has ever run a race in an unfamiliar city (feel free to raise your hand, unless you’re in a public place).

When we decided how early to arrive, Kevin knew how early to leave and where to park. When we decided to swing by McDonald’s for some pre-race bacon egg and cheese bagels, Kevin knew the route with the shortest detour. I mean, he even knew where to go when I found myself in a dire dearth of Run Gum two days before the race. (No, I didn’t actually chew any during the race. I planned to. Add it to my list of plans that I scrapped in the 11th hour.)

That really only scratches the surface (consider: home-cooked feasts for race weekend eating, floating along on someone else’s agenda for the weekend… so much!). In fact, I think I’ve decided to change my message. Instead, it should be “Pick races in cities where family or close friends live.”

Did you (or do you or will you) run high school cross country? If so, at some point someone (likely a coach, possibly a parent or teammate) yelled at you during a race about things like taking tangents (hypotenuse?), running straight lines, following the course not the line, or something like that.

Here’s the fact of the matter: in a 5,000 meter race, it’s mostly pointless. In a half marathon with lots of turns, it’s no joke.

Now, we must all pause to acknowledge the fact that no course measured by man is true to its claim. You’re not actually running 13.1 miles (let’s be precise, here: 21 kilometers) when you run a half marathon race. In fact, the only thing you can guarantee when running a certified (USATF) course is that it is not shorter than the advertised distance (although, when USATF certifies for like 10 years at a time, you do find yourself wondering).

In almost all cases, the course is long. But that doesn’t mean you have to run the whole thing.

Remember that advice from your high school cross country coach? Here’s where it really pays off. Consider my numbers from Flying Pig. The advertised distance of half marathon suggests 13.1 miles, but consulting my highly accurate Stryd Live foot pod that was tracking speed and distance (and reporting it to my top of its class Garmin Forerunner 935), I ran 12.81 miles.

People. That’s over a quarter mile shorter! At the pace I was running, that amounts to a minute and twenty seconds shorter than that same pace over 13.1 miles.

Is it possible the course was actually a tad short anyway? Yes.

Is it possible my irreproachable Stryd Live foot pod measured just a hair short? No!

Either way, I definitely ran shorter than others in that race purely on the basis of course navigation efficiency. Hug the corners, always run toward the next corner (not down the middle of the road), and anticipate the course so you don’t overcorrect.

And maybe that’s a good transition into a quick barrage of the other things I might mention about the race.

And one more thing…

Grace (that thing God gives even undeserving punks like me) clarifies all moments in life. This time, when I bid them fly, my feet flew. Next time, they may not. For those (approximately 13,000) steps and the many that came before, I am grateful. And though it’s harder, during the times when flight evades me, still I am grateful. After all, undeserving punk that I am, I got no more right to the victories I’ve won than any other.

Running in a Winter Wonderland

The Next Level: Elevating Your Run | Podcast ep 5

Why Spectate a Road Race?
Scroll to top
Interested in a Service?